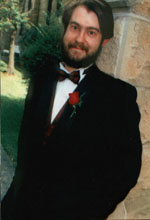 LDraw.org hasn't always been a community's effort. Initially the LDraw File Format and the original LDraw and LEdit DOS programs were the creation of a single man: James Jessiman. James died from complications of a flu in the morning of 25th July 1997 at Wagga Wagga, NSW Australia. He was twenty-six years old. We'd like to remember the person who started it all.

James wasn't just LDraw; get a picture drawn by his parents back in the year 2000:

"James Anthony Jessiman was born on 8th June 1971 in Wagga Wagga, New South Wales, Australia. He died there on 25th July 1997 of influenza.

In his all too short life, James enjoyed:

James displayed a remarkable aptitude for thinking and logic at a very early age winning many competitions in both Science and Mathematics. In fact, his first computer was gained as the prize for being first in the state of NSW in a Science competition at the age of 13."

Original 'In Remembrance Of James Jessiman'

The community was deeply touched by James Jessiman's passing. Included below is the original James Jessiman Memorial that was displayed just before LDraw.org was launched.

On July 25, 1997, James Jessiman passed away. His passing at a young age stunned and saddened a worldwide community of friends.

But he will be long remembered. And that memory will be cherished by all whose lives he so deeply touched. For James had given a gift to the world. A gift that he had spent countless hours of toil to realize, then given freely to all.

The worldwide community of LEGO fans lost a bright light in the passing of James Jessiman. Here perhaps, in some way, we can keep a little of that light alive.

Since James' passing much has been done to continue the development of LDraw and related resources. The contribution of LDraw has been like a water drop causing a large ripple effect impacting all of its surroundings.

James' memory will live on in his creation and in our hearts forever. He not only contributed this wonderful resource, but his kind spirit and helping hand gave each of us a little boost. James made an reversible impact on the world around him, which in his case was literally around the world.

The James Jessiman Memorial Award was established by the Jessiman Family to honor an individual who has contributed to the furthering of LDraw, the DAT format, and James' memory.

Every year, in consultation with Don and Robyn Jessiman, the LDraw.org Steering Committee carefully choose the recipient from amongst those who have worked hard to keep LDraw alive, with the caveat that current SteerCo members are ineligible. Here is a list of the past recipients:

Until 2005 there used to be held a prize giving ceremony at BrickFest in Washington D.C. The 2006/2007 SteerCo has slightly changed the formula of this presentation. The prize is now be given "virtually" and is no longer bound to an actual LEGO Fan Event, due to the fact that LDraw.org is primarily a online community with members spread all over the world. The recipient beside getting the established plaque - is honored for an entire year at LDraw's front page (have a look at the top right-hand corner). The SteerCo's decision aimed to balance the lack of chances for non-Americans to attend BrickFest.

A recollection of his life by his parents. With permission from Publisher Joe Meno as well as Robyn and Don Jessiman we are honored to mirror an article published in BrickJournal, Spring 2006, Volume #1, Issue 4.

Commemoration-Gallery of the 10th anniversary

This gallery pays tribute to the 10th anniversary of James Jessiman's passing showing pictures of a:

(a red Brick 2x3 for all those who are not LDraw savvy) LDraw.org's logo.

Following James' death, several members of the community wrote him sentimental letters. View these here. Also, view the archive of the guestbook of the original James Jessiman Memorial site.

James' personal website is still available to view online. The above link takes you to the Archive.org version of his site as it was when he passed away.